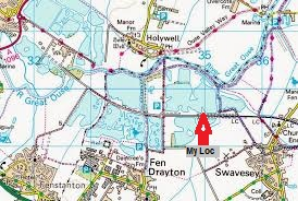 After making sure batteries were fully charge and packing up my “Shack in a Sack”, I mounted my trusty steed (mountain bike) and rode the 5 miles to a previously recce site for an afternoons Amateur Radio operating. Sun was shining and the temp was about 21C, so perfect for sitting by the lake.

Set up within 10 minutes with my 10m SotaBeam Travel Mast supporting my BandHopper IV Linked Dipole AE on 40m.

On plugging into KX3 I thought there must be a fault as I could not hear anything on the Band, not to be perturbed, I put out a CQ call on CW and straight away I was rewarded with a reply of 579 from a station up in Newcastle (400 miles). I realised that there was no AE or Eqpt fault; it was just that this location (in the middle of a lake – figuratively speaking) was free of any interference. FANTASTIC!!

Stayed out for 2 hours in a very quiet and pleasant QTH and made 7 contacts (England, Northern Ireland, Guernsey, Germany & Norway) in total (6 CW (Morse) and 1 SSB (Voice)). I was very pleased with my excursion to a very new location.

Oh yes, as well as checking out the new location, it was the first time that my KX3 had travelled in its new box;